Hard rockers Crossing Rubicon, who features Jeanne Sagan – formerly of All That Remains – on bass, have set the release date for their hotly anticipated album entitled No Less Than Everything. The twelve track album, which can be described as a throwback to metal of the 80’s and early 90’s mixed with modern rock, will be released February 12th on Pavement Entertainment. The lead single for the debut full length was the album’s second track, entitled “Unhinged.” 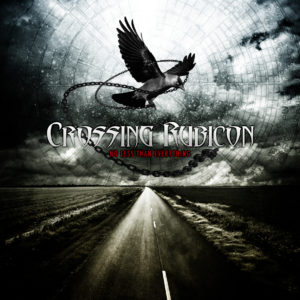 Crossing Rubicon is a rising original hard rock band from Bristol, CT. They have developed a sound that blends heavy riffs with melodic harmonies to create a unique brand of passionate music. Crossing Rubicon was formed in 2009 by the band’s frontman, Scott Wawrzyniak. Zach Lambert and Jesse Near create a formidable guitar tandem with their heavy riffs and vibrant guitar harmonies. Brandi Hood‘s drumming and Jeanne Sagan’s bass playing display a tight and energetic rhythm section for the backbone of the band. Scott produces a multi-faceted voice, with a strong stage presence that no one else can replicate.