Maynard James Keenan. A man of many talents and faces, and wholly worshipped by many. No, I’m not kidding. A man well known for his forays into music (TOOL, A Perfect Circle) and wine, and a myriad of other skills (Brazilian Jiu-Jitsu and comedy), tends to get pigeonholed with his two most famous bands. Fortunately for us, there are so many more facets to him.

A prime example is his pseudo-solo project Puscifer, a musical endeavor that allows him to show and shine with other aspects of his talents and humor. Rounded out by Carina Round on vocals and keys, and Mat Mitchell with synthesizers and other sounds, along with touring members Josh Moreau on bass and Gunnar Olsen on drums, this project is unlike anything else I’ve seen.

Touring in support of their latest album Existential Reckoning, Keenan, is seen parading around as his alter ego, Agent Dick Merkin, exuding both humor and an ego that is both intentional and a parody towards those whom worship him. The use of Men-in-Black theatrics, showing part conspiracy theorist and teasing towards those that follow such things, put this show on another level. Breaking the fourth wall, even the videos played before and during the set push the idea that SPAM (TM) is made of human meat and that if people use their phones, they will be ground up, akin to a modern-day Soylent Green.

Humor, the very dry and sarcastic tone of it, is at the forefront of the entire set. The band performed every song off the Existential Reckoning album, but they also performed popular cuts Momma Sed and Vagina Mine from “V” is for Vagina, The Humbling River from “C” is for (Please Insert Sophomoric Genitalia Reference HERE) E.P., Conditions of My Parole from the album of the same name, and The Remedy from Money Shot.

Each performance was interspersed with bits of skit and theatricality that is unseen in any of Keenan’s other major work, but this is what makes the Puscifer show fun, and genius. The dry wit, audiences eating it up, and a self-referential ideology bereft of irony make this all the more fun.

Whether you’re a fan or not of Keenan, this is certainly one of the more fun shows to see. Go see it, especially if you need a good laugh! 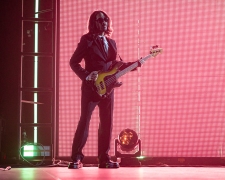