The theatrical firebrand Avatar has been touring the world since the release of Avatar Country in January of ’18, and they are showing no signs of stopping. Having hit the US on at least three legs in support of the album, the King and his court continue to tear up the road and the venues they have been performing at.

Although classified as melodic death metal. the boys have their fingers in sounds from a variety of genres, including, but not limited to country, rock, progressive, psychedelic and everything in between. Johannes Eckerstrom (vocals) can go from clean, sweet crooning, to the howls like Axl Rose and Brian Johnson. Surprisingly, he can even pull this off at the live shows.

Kicking off the show with “A Statue of the King“, they showcase a flair for drama and theatrics, to great effect. Crowds respond immediately with thrill and excitement of not just the music, but the show that’s being put before them. Performing favorites from their last four albums, “Paint Me Red” riles up the crowd while “Ready for the Ride” and “Get In Line” put the fans through the paces.

These guys, who will be continuing their tour this fall in the US as well, are one to keep an eye on. They’re not only on the map, but they’re burning through the paper it was drawn on. 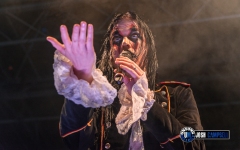